Narelle Clay, CEO of Southern Youth and Family Services, spoke to Crossfire in December 2008 after Prime Minister Kevin Rudd announced The Road Home, an initiative to decrease the nations homeless population by the year 2020.

Narelle Clay joined Crossfire to discuss the on-going problems and whether the economic down turn has meant more people are asking for help.

For more information on where to find assistance visit the Southern Youth and Family Services website.

Hundreds of people wandered through the maze of colour, ink, needles and piercings over the weekend at the Sydney Tattoo & Body Art Expo. 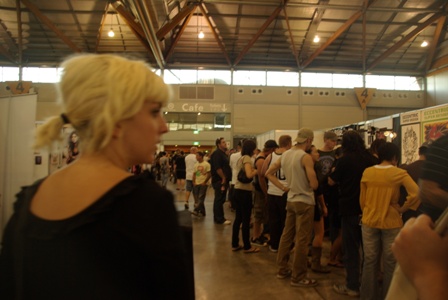 155 artists from Australia, France, Germany, Indonesia and other worldy body art arenas came to compete and showcase their works at Sydney Showground to the hardcore tattoo fans of Sydney.

Burried among the booths of coloured skulls and tongue rings was a different kind of tattooist. Val Glover-Hovan is  cosmetic tattoo specialist and educator who has been colouring the lips and eyes of men and women since 1985.

‘Wake up with Make up’ is the slogan ot booth 88 at the three day expo, and at Vals’ studio in Sydney where she consults and tattoos clients needing everything from eyebrows to medical scars covered up. The trend is popular and growing, but also an unusual one to those who may not ever have considered taking such an extreme measure to have permanent make up.

Val at booth 88 at the Sydney Tattoo & Bodyart Expo

Val spoke to crossfire while at the expo. Listen in to learn more…

Jacqui here, just thought I’d say hi from the Indonesian city of Jakarta will I have been for the past two days and will be for the next seven weeks doing a journalism internship.
Happy New Year.
Jacqui

On Friday the Federal government officially announced a $4.7 billion Nation Building Package focused on infrastructure. The investments are another economic crisis combat tool from Prime Minister Kevin Rudd and his Labor Government.

The package will be divided between road, rail and education infrastructure; in many cases bringing already approved and future projects forward. Tax changes for Australian businesses will also be implemented.

$1.2 billion of the package will be put into the nation’s rail network. $580 million of that will go towards the railway connecting the Hunter Valley coal mines and Newcastle Port.

$711 million will be put towards road construction and improvement projects and will push funding for the Black Spot Program to $110 million from $50 million.

Four NSW road projects have been fast tracked in the package. The Woomargama Bypass and Tarcutta Bypass on the Hume Highway and the Bulahdelah Bypass and Sexton’s Hill, Banora Point projects on the Pacific Highway.

No funding has been put towards the Princess Highway and local Liberal members have criticized this decision by the federal government.

In education, $1.6 billion will be invested in Universities and TAFE’s nation wide. The Minister for Education, Julia Gillard announced a new Teaching and Learning Capital Fund for Higher Education which will inject $500 million into universities.

$500 million will also be delivered to public skills and training through The Teaching and Learning Capital Fund for Vocational Education and Training.

Questions have been raised by the federal opposition about the possibility of the budget being dimished and put into deificit by Mr Rudd’s investments and rescue packages. Opposition Leader Malcolm Turnbull described last weeks cash handouts as a “sugar hit” and suggested that tax cuts would have been the better defence against recession.

Kevin Rudd says this latest national investment package will not put the budget into deficit.

The Garling report suggests the NSW health system is in a “period of crisis” despite the initial assessment being that in comparison to world standards “NSW still has one of the better public health care systems in the developed world”.

The report identifies areas of concern in the system and makes recommendations for improving them. On the list are mental health services, out of date or inadequate equipment, lack of beds and over crowding of hospitals, lack of maternity services and long waiting lists for elective surgeries. Bullying was also covered in the report.

Mr Garling recommended that the Bulli’s emergency department be closed saying “Bulli District Hospital ought to be closed. It is unsafe…”. Mr Garling says one witness described the department as a “misuse of the name”.

Over the past month, the South Eastern Sydney Illawarra Health Services’ intentions to close the Bulli hospital surgical ward has attracted a lot of public comment. The department offers non-life threatening elective surgery for ear, nose and throat patients. In a media statement released on the 24th of October the service said this was a recommendation from “the surgeons themselves”. It was later revealed that the surgeons had not made this recommendation.

Politicians, in the wake of the report, have pledged their commitment to improving the NSW public health system.